March 2014- Leela – a showing of Indian classical dance and music

We are currently working on a new album. Watch this space as we keep you posted on progress- we’re very excited!!

Tapestries of Sound provided the accompanying music in the showcase ‘Leela’ directed by Jeni and Mahesh in March 2014. This performance presented pieces from the Indian classical tradition and beyond.

With the flame still aglow, last year Tapestries of Sound rekindled with longtime members Robin Dixon (cello/banjoes/vocals et alia), dancer and rhythm player Jeni White and Mahesh Radhakrishnan (vocals/guitar/tambura), with the hot addition of new members Andrew Purdam (percussion/accordion/strings/vocals) and Nitya Bernard Parker (woodwind/guitar/vocals) in Canberra and a shift in centre of sorts towards the capital. We bubbled forth an awesome set of gigs from late 2013 starting with a festival in Wagga, shows around the traps in Canberra, providing the live musical accompaniment for a very exciting dance production directed by Jeni and myself (here’s a clip from it- https://www.youtube.com/watch?v=BlOYL1hNhwU ), through to the St Albans Folk Festival in April this year (see photo :-)). Needless to say we are brimming with enthusiasm- and flavour. And we’ve almost run out of our copies of Unsung Yarns! Not long now!

After this stirring series of gigs, another break from gigs is now upon us roughly till the end of this year- this time, for the purpose of jam, new musical possibilities and rumours of another recording (shhh…). And these are on the boil! We have just spent the last two weekends in creative development in the rural outskirts of Canberra and Sydney where we’ve been exploring and experimenting with new sounds, signatures, sequences, sacred silences and, let’s face it, silliness.

Like its slow-cooked sumptuous likeness, we have thus far drawn on the creative savour of the seasoned and the spring chokoes with the benefit of returning members Jess Randall (nyckelharpa/violin) and Dave Carr (banjo/guitar) and our most recent ingredient in the Tapestries tree, Philippa Murphy-Haste (clarinet/viola/vocals) and inspirational vibes from further afield. And if the rumours of a recording be true, we are über excited about the prospect of working again with the amazing sound magician Greg Le Couteur who recorded Unsung Yarns and hosted our Sydney creative development. Building on the lingering legacy of performers and creative contributors past, present and future there is much to look forward to! Stay tuned for more news.

Leela: A showing of Indian classical dance and beyond

After a brief hiatus, Tapestries of Sound are excited to be BACK, returning with a fantastic gig in October supporting Bustamento with their wicked calypso and ska sounds at Fusion13 in Wagga Wagga. Here are some great photos from our gig taken by Brett Koschel. 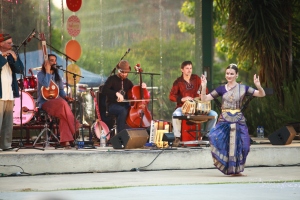